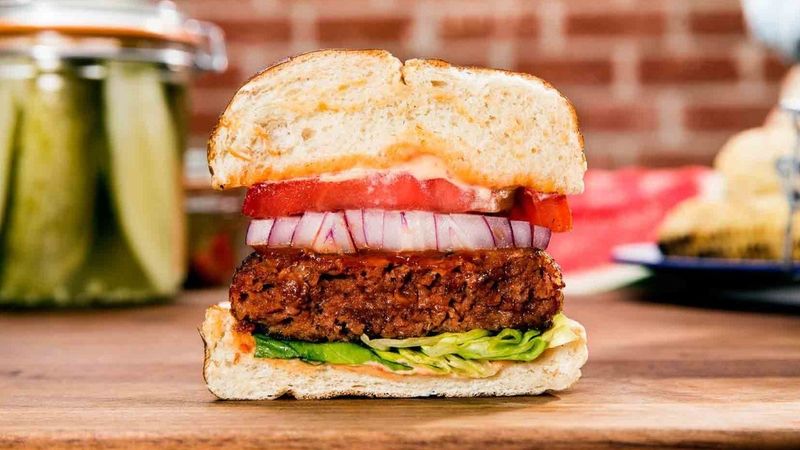 Beyond Burger is the world’s first plant-based burger that looks, cooks, and tastes like a fresh beef burger.

The Beyond Burger is a plant-based alternative to meat designed to look and taste just like a real beef burger. The only difference: it’s not made from animal meat.

The premise behind Beyond Burger was that meat’s core parts — amino acids, lipids, trace elements, carbs and minerals — are not exclusive to animals, but all have plant equivalents. The challenge that took more than 7 years to overcome, was to find these equivalents and assemble them to recreate the architecture of meat.

Beyond Burger’s primary source of protein comes from peas. Each burger packs 20g of protein and has no GMOs, soy or gluten. Every effort was made to ensure the burger looks, cooks and tastes just like the real thing. To the point that beets were used to mimic the red color of the meat and the “bleeding” effect that happens when you cook a beef burger.

As a result, the Beyond Burger has all the juicy, meat deliciousness of a traditional burger, but comes with all the upsides of a plant-based meal.

Who is it for?

Interestingly, Beyond Burger is not aimed at vegetarians. Instead, the company wants to reach flexitarians and, generally, people who love meat. By giving them a juicy alternative, they consume less meat, which in turn helps improve their health, sustainability, and animal welfare worldwide.

What makes it responsible?

The Beyond Burger allows you to enjoy the full mouth-watering, juicy, and delicious experience of beef but without the health, environmental, and animal welfare downsides of traditional animal-based meat.

What makes it better than competition?

The Beyond Burger comes a ready-to-cook “raw” patty that you just throw on the stovetop, griddle, or grill. Designed in cooperation with Brendan Brazier, a Canadian former endurance athlete, author, and vegan diet advocate, the burger has a healthy dose of protein and a slew of vitamins, minerals, antioxidants, and omegas to help support performance and recovery for especially active folks.

Scroll back to top